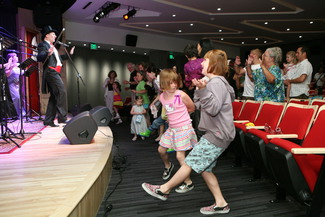 "Beethoven's Wig was a sell out! (Meyerhoff Hall) The artists of Beethoven's Wig are true professionals in the business of entertaining children. From the morning news, through every press release and on to performance, Beethoven's Wig was one of the most accessible ensembles we have hosted." - Lisa A. Sheppley, Associate Director of Education, Baltimore Symphony Orchestra

"The wonderful thing about Beethoven's Wig is it's multigenerational. It may be considered a kids show but I think the adults, grandparents and parents are having as much fun or even more so because it's a multilayered show." - Rina Reynolds, Executive Director, Billings Symphony Orchestra

"If you haven’t seen Richard Perlmutter in action, prepare to be delighted.  If you have seen him, prepare to be even more delighted.  He has added animation to his show, something that is at once clever and hilarious…cartoon characters with whom Mr. Perlmutter, through impeccable timing, conversed and interacted.  He enthralled the audience at the Littleton Lyceum. He engaged children and adults alike introducing the former to the charm and romance of classical music while pandering to the latter with often wry and witty comments.  One of the outstanding moments in the show was the animated version of Beethoven’s “Moonlight Sonata” in the unlikely setting of a traffic jam and to a chorus of various car and truck horns.  While keeping the original charm of the music, Mr. Perlmutter captivated us with his witty lyrics.  I highly recommend Beethoven’s Wig, it is innovative, fun and great entertainment!" - Andrew Bowers, President,  Littleton Lyceum Committee, Littleton, MA

“It was a pleasure to work together with Richard Perlmutter, who possesses a winning combination of solid technical musical skills with a genuine sense of humor, and playfulness that really connect him with the audience, young and old.  His show was interesting and innovative and the animation was wonderfully inventive and interactive.  It was fun and funny and kept the audience captivated right up until and including the standing ovation when the audience got up and danced along.  An outstanding show for young audiences and an excellent introduction to classical music.”  - D’Arcy Morris Poultney, Executive Director, Cecilia Concerts, Halifax, Nova Scotia

"From their formal attire to their witty and engaging songs, Beethoven's Wig captured the attention of both children and their parents and had them humming Tchaikovsky all the way out of the museum." - Kait Stuebner, Education Manager, Grammy Museum, Los Angeles, CA

"We were thrilled to book a complete sell out as part of our Education Outreach to students serving close to 20 counties in Central Virginia. The students and the staff at the Paramount Theater loved having you here. The show was a huge success and it is a true testament to the generous spirit of the touring party and the intelligent and humorous production delivered. We loved every minute! We wish you great success on the road and look forward to working with you soon!" - Mary Beth Aungier, The Paramount Theater, Charlottesville, VA

"Thank you! It was a fun performance and the audience really had a good time. We've had nothing but rave reviews." - Nancy Decker, Executive Director, Cypress Creek FACE, Cypress Creek, TX

“Beethoven’s Wig was a huge hit at our school!   The show was fun, entertaining and sprinkled with interesting historical facts about classical music throughout.  The students were completely enthralled as Mr. Perlmutter interacted with the animated version of Beethoven throughout the performance.  He had a wonderful rapport with the children.  His live music, played on the piano, guitar and mandolin, brought about spontaneous clapping from the students…so much so that we could barely hear his wonderful lyrics!  A wonderful program!” - Becky Aurilio, Enrichment Coordinator, Cranbury Elementary School, Norwalk, CT

"The Beethoven's Wig performance at the Museum was a huge hit! Perlmutter's exuberance is contagious. I was amazed to see kids jumping out of their seats for classical music. And the material is so witty and intelligent the parents loved it too." - Carol Zawatsky, Director of Education, Jewish Museum, New York

"Many, many thanks for many, many things! We had such fun working with you. It was a personal treat for me to see it all live, after having listened so many times! And you will be pleased to know that my "way too cool and jaded" 12 year old really enjoyed himself...perhaps in spite of himself! Testimony to the power of music and words... and a whole lot of humor. Hope to do it again soon. " - Michele Levy, Walnut Hill School for the Arts, Natick, MA

"This is the young people's concert of the future for symphony orchestras around the country. There is humor on many levels and information on many levels. The scores are professionally done, beautifully laid out. Every note in every part is correct. We didn't lose any rehearsal time." - Henry Charles Smith, Guest Conductor Billings Symphony Orchestra, Former Conductor Minnesota Orchestra

"This year the Belmont Public Library hosted our most successful April Vacation event ever. Richard Perlmutter’s solo performance of Beethoven’s Wig attracted over 350 children and adults – despite the beautiful weather outside. It was an event the whole community was looking forward to, and Richard did not disappoint. The audience was mesmerized for a full hour, and at the end walked away truly entertained and educated!" - Denise Shaver, Belmont Public Library

"Richard Perlmutter is a consummate professional who engages the audience both young and old to sing along and be involved with music that they would under normal circumstances not be listening to. The stellar quality of the performers, Richard and the opera singers is a treat for a family audience and leaves them with knowledge of classical music that will inspire them to learn more." - Debra Pasquerette, Education Director, Geffen Playhouse, Los Angeles

"Performing with Beethoven's Wig was one of the highlights of the orchestra's season for both the players and the audience. Their hilarious show was entertaining and informative. Richard Perlmutter's insightful musical wit belies his vocal virtuosity and the orchestra parts were well written and clearly organized. The show went off without a hitch and was enjoyed by parents and children alike. This group is on our 'must have them back' list!" - Dr. Keith A. Cochrane, Music Department, San Juan College, Farmington, NM

"Our concert with Beethoven's Wig was marvelous! My students and I both had a wonderful time working with the very professional singers. It was a real treat for all of us to be actively involved in the show and not just playing as the "house band" – the orchestra had as much fun as the audience! The orchestra and I were truly impressed how Beethoven's Wig presented great music to young children in an engaging and entertaining way without pandering to the audience or 'dumbing down' the music. We would love to perform with Beethoven's Wig again!" - Dr. David C. Cole, Director of Orchestral Studies, Sam Houston State University, Huntsville, TX

"Richard Perlmutter and the cast of Beethoven's Wig were a delight to work with and the concert was an outstanding addition to our 25th Anniversary Season. As far as family concerts go, Beethoven's Wig is one of the best packages for an in house orchestra that I have worked with regard to affordability, professionalism and minimal tech requirements. Beethoven's Wig offers a fast paced concert that is highly engaging and entertaining for all ages. With four commercial albums to their name, Beethoven's Wig has built in merchandising. Also, the cast was willing to sign autographs after the performance which always adds the volume of merchandise sales to create a win/win for the presenter and the artist." - Scott Black, Executive Director, OK Mozart Festival, Bartlesville, Oklahoma