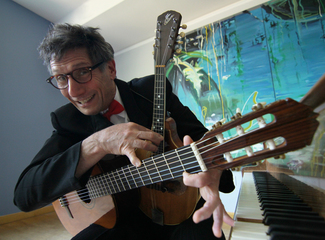 Richard Perlmutter is the creator, lyricist, and lead singer/entertainer of Beethoven's Wig. In his solo performances, he sings and plays the greatest masterpieces of Beethoven, Bach, Mozart and more on piano, classical guitar and mandolin.

Perlmutter has staged his solo show at performing arts centers, museums and libraries throughout North America. During his solo shows he shares a wealth of fun facts and stories about classical music and composers.  His quick wit, songwriting genius and vocal acrobatics have drawn comparisons to Victor Borge, Tom Lehrer and Danny Kaye.  Perlmutter's solo show is a treat for children and adults of all ages.