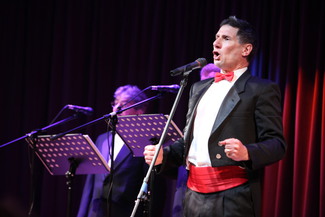 "What's the most far out place you could find a recording of Beethoven's Fifth Symphony? The answer lies in the CD itself." - Susan Stamberg, National Public Radio "All Things Considered"

"A perfect cross between entertainment and education, powered by lyric writing of exceptional craft and imagination.... It evokes a century of musical storytelling, in the most whimsical and clever traditions spanning Gilbert & Sullivan to Tin Pan Alley to the best of Sesame Street. Lyricist and singer Richard Perlmutter understands children as well as he understands music, and his love and passion for both fairly show through in every track." - Ventura County Parent

"I hope "Beethoven's Wig" receives the Grammy ... recordings like this do not come around often ...." - Fred Koch, Chicago Parent

"Silly lyrics cleverly draw in young listeners to the world of classical music in this high-spirited recording. This often goofy sing-along CD is a lighthearted way for young children to make acquaintance with popular classical works... Five Stars." - DiscoverySchool.com

"His songs are funny, but Perlmutter is not just a highbrow "Weird Al" Yankovic. The lyrics are hummable mnemonics, each imparting information about the work or its composer." - Nicole Arthur, Washington Post Staff Writer, The Washington Post

"If you're a kid — or a kid at heart — chances are you find the thought of Ludwig van Beethoven's silly white wig more amusing than the great composer's timeless compositions." - Renee Montagne, NPR

"For those who have never thought of classical music as a "let-your-hair-down" type of entertainment, try on "Beethoven's Wig." - Julia Ann Weekes, NH Weekend Editor, New Hampshire Union Leader

"Classical music was never supposed to be this much fun. Was it?" - Lori Sears, The Baltimore Sun

"Listen just once to his 2002 debut, for example, and you'll never hear the opening bars of the composer's fifth symphony without thinking "Beethoven's wig…is very big!" - Nicole Arthur, The Washington Post

"The crowd sang, giggled and clapped along throughout the show, and when Perlmutter invited the audience to stand up and do the can-can with him, they obliged." - Jaci Webb, Billings Gazette

"[Perlmutter will] encourage families to sing and dance along, challenge them to trivia contests and basically just have fun with the classics." - Billy Heller, New York Post

"Inspired and wildly imaginative, Beethoven's Wig is one of the best introductions to classical music you could give to your children." - Martin Keller, Amazon.com