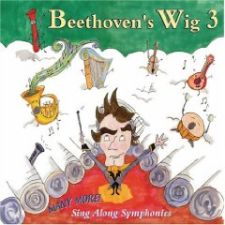 Most Popular Songs Bull In A China Shop, Play My Song, A Manly Man, Take Me to Your Leader

This is Perlmutter's first concept album.  Each song features lyrics set to a well-known classical piece featuring one of sixteen different instruments.  Included are the cello, flute, French horn, trumpet, trombone, clarinet, harp, timpani and English horn. And some instruments that people don't necessarily associate with classical music, like the mandolin.

Highlights are "A Manly Man," a doo-wop style tribute to both the bass in the orchestra and the bass singer in Beethoven's Wig. And "Play My Song" about poor Beethoven's heartbreak when he dedicated his only "bluegrass" composition for mandolin to a young lady who would not play it. Also included are a series of extremely short songs  - one only lasts 10 seconds – featuring the xylophone, harpsichord, and trombone. Beethoven's Wig 3 also contains the science fiction favorite, "Take Me To Your Leader," set to the famous theme from the movie "2001 A Space Odyssey."

Beethoven's Wig 3 features vocal cameos by Perlmutter's three children and two of their cousins.  In addition, Perlmutter's son Sammy did the cover art and booklet illustrations.  And Perlmutter's brother Tom did the booklet layout and graphics!

As a bonus (one that's included in every Beethoven's Wig album), there are trivia questions about the pieces and the composers.  And for kids, parents and teachers there are activities to supplement the songs.   At the end of the vocal renditions, each piece is performed without the words by a world-class orchestra, just as it was originally written.

This album won Beethoven's Wig its third nomination for a Grammy Award for Best Music Album for Children.  One reviewer summed it up, "A must have for parents who love classical music.  It's honestly unique.  I've never seen anything that compares with this amazing collection of songs for children."